The Cranberry Township Volunteer Fire Company (CTVFC) was formed as an independent organization in 1959. In 1960, CTVFC built its first fire station along Dutilh Road. That same year, the Company bought its first new fire engine, as well as a 1928 Pirsch, which remained in active service until 1967. Now fully restored, the antique pumper is used as an historic parade vehicle.

Over the following years, a series of facility expansions, equipment improvements, and service extensions were implemented. They included a contract to respond to incidents along the Turnpike in Cranberry, the formation of an Ambulance Corps, the creation of a Junior Firefighter organization, a Ladies Auxiliary unit, and an active fire prevention program. Agreements with neighboring fire companies to form a Mutual Aid association were also formulated.

In 1981, after an extensive period of internal discussion about the Company’s future direction and a study of its growth by Penn State University, the Company agreed to transfer its assets and provide fire service to the Township in return for which the Township would finance the Company’s equipment, facilities, and operations. A one mil property tax was enacted to fund those activities. Several years later, the Ambulance Corps became an independent entity. Today, the Fire Company conducts an annual fundraiser for those retention activities which are not funded by the Township.

In 1984, when the Haine School Fire Station was completed, the Company sold its original building and established headquarters in the new facility. Eleven years later, a second fire station was built along Route 19 by the entrance to Community Park. In 1999, the Township created the full-time paid position of Fire Company Administrative Assistant to manage the record-keeping and other related office activities of CTVFC. In 2006, the Township completed a four-story fire tower – part of a safety training complex allowing volunteers to practice fire attack and rescue tactics close to home.

Cranberry Township and the Cranberry Township Volunteer Fire Company (CTVFC) encourage the use of the PSTC by outside organizations for emergency preparedness training and individual and group education, on topics related to the fire and emergency services. View the Complex

Request to reserve the complex for a training event or meeting, Facility Request Form 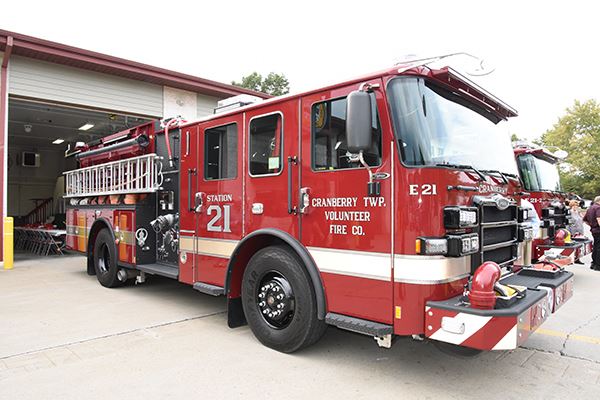